Making Changes That Matter and Last 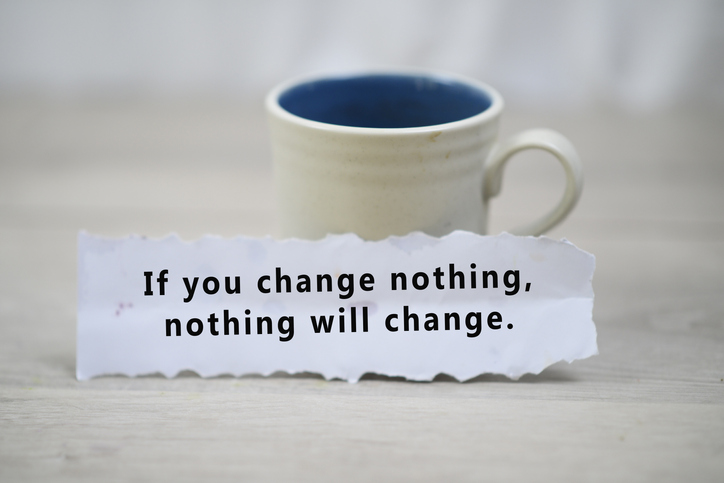 It is fairly simple to make some changes in our lives. We do it every day. We change jobs or get a new car or move to a new home. Maybe we enter a new relationship. These can be significant changes that may or may not be easy, but we make them anyway.

Then there are the changes that we desperately want to make and to see stick that we struggle with deeply. Leaving behind an addiction, such as pornography or overeating come to mind. Or maybe there is a relationship pattern that we’d like to see broken (emotional dependency or defensive detachment, for example). We try and try again to effect changes that last, but we fail time and again.

In his workbook Facing the Shadow, Patrick Carnes talks about two types of change. The first is called First Order Change. These are the types of changes that quickly address a problem and address a specific consequence.

Carnes uses an example of a woman who has been married three times to abusive alcoholics. Each time she married, she hoped that her choice would be better, but each marriage was progressively worse. She was changing her circumstances (getting a new husband), but not addressing the reasons she was making the choices to begin with.

In my own struggle with pornography, I can relate. I placed filters on my computer to limit my access to inappropriate materials. Before the internet, I cut up membership cards to certain video rental places to make it more difficult to go back there. These changes had an immediate effect, but I would find myself back in the same struggles time and again.

First order changes are important. We need to make them in order to create space for what Carnes calls Second Order Changes. The problem is that we trick ourselves into believing we have done the work necessary by making the changes to our circumstances. But this does not go far enough.

Second order changes are those steps that people take to actually change the dynamics of their life and the way they live. In The Seven Habits of Highly Effective People, Stephen Covey points out that if you only focus on behavior, you will achieve only modest change.  Significant change requires an internal “paradigm shift” – a change in the belief system that supports the addictive system.

Back to Carnes’ example of the woman who was married three times: Her story did not end with her 3rd marriage.  She began to look at her own life.  She found a therapist and began going to Al-Anon.  She learned that she felt dependent on men and had few relationships with women.  She learned that the criteria she used for selecting partners were rooted in beliefs formed during an abusive childhood and in intense feelings of inadequacy.  She made new plans for herself, took a break from dating, learned to set appropriate boundaries, and eliminated the people from her life who abused her.  That is second order change.

My early attempts at changing my usage of pornography were almost exclusively focused on first order changes.  I also prayed that God would change me…a lot.  It was all I knew how to do at the time.  It wasn’t until I got to the end of my rope that I realized I needed help and that I couldn’t make lasting changes on my own.  This is when I came to WGA and started learning about the underlying issues that I was running from.  I did discipleship counseling with Scott and Mary.  I discovered that my desire to connect was a good, God-given need.  I learned that there were other ways of connection besides through pornography and sex.

Even though I have done a lot to make lasting changes doesn’t mean that I will be free from temptation and struggle.  It doesn’t mean that I won’t fail sometimes.  But, my chances of success are much greater, because I understand my motivations and I know how to get my needs met in healthier ways.

So how about you? Can you relate to the concept of making First Order Changes and then stopping there without doing the work of Second Order Changes?

If you enjoy reading WGA’s blogs and would like to show your support, please consider making a donation. Where Grace Abounds is a 501(c)3 non-profit organization. The majority of services, including support groups and discipleship counseling, are provided free of charge. Your financial gifts help to cover the costs associated with offering a free program to those who seek WGA’s services.
Donate Here