Honesty, a Building Block of Community 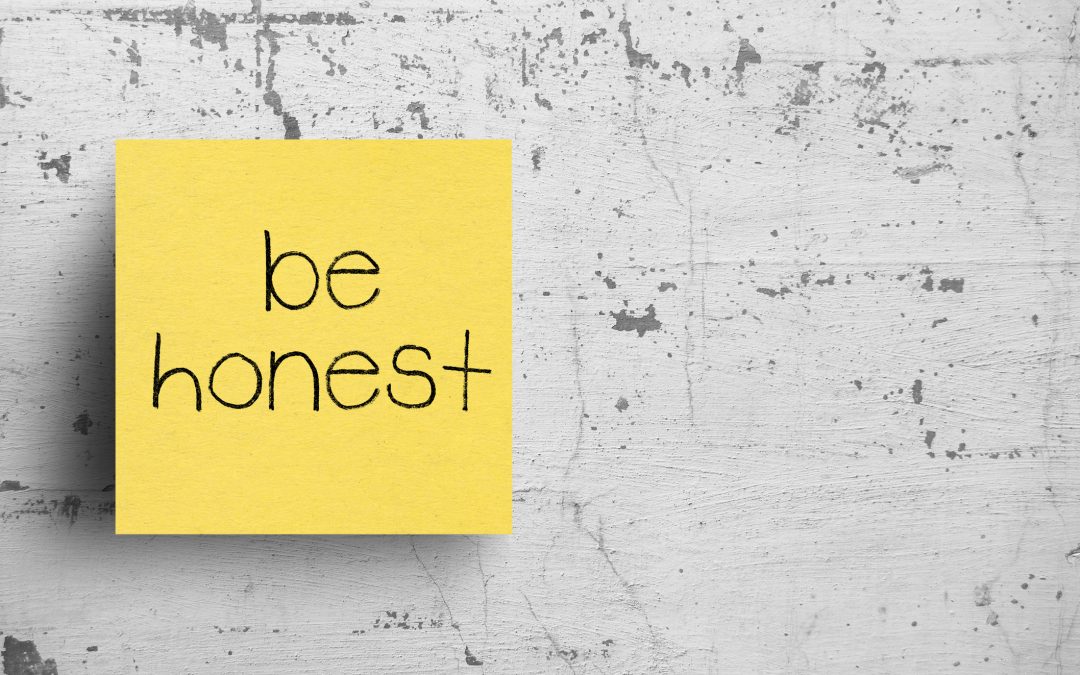 Why is it that so often we have difficulty being honest with one another, particularly with our Christian friends?  I’m not talking about lying, although that can be a part of the problem.  Mostly, I’m talking about how we use the “F” word.  How are you doing?  I’m “fine.”  We say this automatically, without much thought.  But how often is it really the honest answer?

The word “fine” is fine when things are fine.  But when they are not, we often gloss over our reality by slapping a happy face on it.  And “fine” is usually the easy answer.  “I had a bad day at work yesterday, and then I went home and had a fight with my wife.  After she went to bed, I looked at porn on my computer until two o’clock in the morning, which made getting up at six o’clock really hard.  I was late to work again today and my boss yelled at me.  I feel like I’m failing everyone.”

See how much easier it is to be “fine?”  Being honest isn’t fun, and I don’t want to burden other people with my problems.  No one wants to be the complaining friend all the time.  “Besides, people will think I’m not living the victorious Christian life if I am always talking about my problems.” These are a few of the ways we convince ourselves not to be honest with others.

So, why be honest?  What are the benefits?  There are several, some of which are good for us and some that are good for others too.

When I am honest about a struggle I am facing or how I really feel about a situation, it often allows others the freedom to be honest as well.  Before coming to WGA, I often felt more at ease with my non-Christian friends.  They didn’t necessarily understand my faith in Christ, but there were not so many rules about how to behave either.  It was okay to let my hair down every once in a while and laugh at an off-color joke (or maybe even tell one).  My non-Christian friends weren’t living double lives.  Some were drinking, having sex with whoever they wanted whenever they wanted, and doing drugs.  True, they were often miserable, but they didn’t seem to feel the need to be “fine” about it all the time.  While I didn’t always agree with the choices, I was drawn to the openness with which they lived their lives.

Over the years, I have facilitated many small group discussions at WGA’s weekly support group.  Some of those have been duds, because no one was willing to start things off with a little vulnerability.  But, when someone comes to the group prepared to talk about the pain they are experiencing in a specific relationship or confess that they’ve been viewing pornography, others respond to this honesty by sharing at a more deep level themselves.

When I share vulnerably in a safe place, confessing my sins to another person, something happens.  I feel lighter, because the shame of my secret is out and no longer weighing me down.  I no longer feel alone, because someone else heard me and still loves me.  He or she may be dealing with the same problems as me, and now I feel stronger knowing that we are working on this problem together.

Honesty creates a culture of transparency

Even though it is difficult, if we are committed to being honest and transparent, others around us will catch on too.  When I first came to Where Grace Abounds in 1995, I was terrified.  I was in desperate need of help, but I could not imagine anything more terrifying than sitting in a group of people and sharing my most shameful secrets.  But I knew that not talking about these things wasn’t working either.  I had no better options, so I came anyway.

It was terrifying too, but not as much as I feared.  In fact, those who had come before me made it much easier for me.  The culture was such that it was okay to be honest.  After a little while, I found myself more and more at ease talking openly about my struggles.  No one was shocked or rejected me.  I felt more comfort and peace than I had in many years.

Honesty draws others to us

As we are committed to being honest with ourselves and others, those outside our immediate circle of influence take notice.  Men and women are starving for real, intimate relationships.  Honesty creates intimacy, and healthy intimacy is a magnet for those who are in need of friendship and love.  This can be an awesome evangelism tool!  Ever heard of someone leaving a church because everyone was fake?  Or maybe they left because everyone seemed so perfect.  No one seemed to be able to relate to them or their problems, because everyone was pretending to be “fine” all the time.

I suppose the reverse of this is true as well.  Honesty can drive away those who are committed to keeping secrets and being “fine.”  We may lose a few friends or a few fellow church members along the way, and this can be sad.  But, in order to be able to receive love and acceptance, we must be fully known.  If all anyone knows of me is the “put together” image that I present to the world, I cannot receive their affection.  They love my “image” but not me.  A commitment to being known and accepted can bring about the loss of relationships.  But the benefits of being known are greater.

A word of caution

Honesty does not always come without negative consequences.  There are some relationships where it may be best to say less than we would with others.  We must use wisdom in what we share and with whom.  Our words can be used against us at times, or we may unintentionally harm someone by sharing too much or at the wrong time.

Being honest gets easier the more we practice it.  As we share more and more of our lives with others, the power of shame is destroyed.  Living an open, transparent life is a better way to live, and it simply feels better than the alternative too.