When Is a Good Time to Leave a Church?

Having raised the question, I must admit that it is a loaded one. There is no entirely good time to leave a church. There is loss, even when one joyfully moves a long distance to advance a career or marries someone from another congregation and joins it. Among other things, we were created for long-term relationships and the Church, for unity. One of Jesus’ final prayers included, “And the glory which you have given me I have given to them, that they may be one as we are one—I  in them and you in me—so that they may be completely one, so that the world may know that you sent me and love them as you love me” (John 17: 22-23).

When is the price of unity too high?

Most Christians would affirm that our goal is unity. It is clear testimony to an increasingly skeptical world that a loving God sent his son to save and sanctify us.  There is far less consensus regarding what constitutes unity in a fallen world and when we should “‘come out from them and be separate’” (2 Cor. 6:17a). Or, to come at this from a slightly different angle, “When is the price of unity too high?” Church history, alas, gives numerous examples of people both voluntarily leaving and being expelled from churches. Martin Luther wished to defend and dispute with other clergy the 95 theses he nailed to the castle church door in Wittenberg. He wanted to rid the Church of people who sold indulgences, not create his own denomination. Luther fought for unity, and what he considered to be doctrinal purity, until he was excommunicated. Many reformers since Luther have prayerfully and purposefully organized new denominations. Equally committed Christians can come to sometimes widely different doctrinal conclusions; only God knows the rights and wrongs of our motives and choices.

So, if not a good time, perhaps a necessary one, to leave a church is when one’s conscience demands it. This, of course, is a personal matter between a believer and God. I suspect that he has led and will lead some to remain in churches and pray and work for reform, but others to separate and pray and work out reform. Ours is a gracious and merciful God who condescends to build his Church with fallible men and women.

Erring on the side of grace

Incapable as I am of either 100% grace or 100% truth, I have gone on record as one who will err on the side of grace. Perhaps that decision predisposes me also to err on the side of unity when orthodoxy might be at stake, even though I regard them as equally valuable. I would not leave a church simply because it became gay affirming, if anything is ever that simple. I would rather stay around and pray from within for change. I believe I am to advocate for celibacy as the crucible in which my same-sex attracted sisters and brothers must work out their salvation and be conformed to the image of Christ. I seek to encourage others to find in celibacy, not a death sentence, but life-giving freedom to pursue Christ with singleminded passion. That is an easier task to accomplish when we, gay and straight, married and single, are actually in community together. So too, I will encourage sexual integrity and freedom from pornography, fornication and adultery among my heterosexual brothers and sisters. I long for both a level playing field and a high bar when sexual behavior is the issue in the Church.

Leaving a church is never easy, however “good” or necessary the reason. As we navigate these divisive times together, let’s pray and work for unity. Let’s acknowledge that it is the Holy Spirit’s job to convict of truth and sin. As we champion orthodoxy, let’s pray that God will increase our capacity to love all of his image bearers. Let’s be counter-cultural and learn how to disagree in a spirit of peace rather than rancor. Then we will be better poised to experience “how good and pleasant it is when God’s people live together in unity!” (Ps. 131:1). 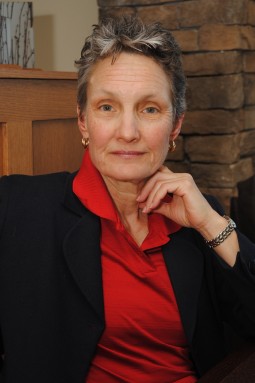 Ms. Emig holds an MA in New Testament from Denver Seminary. Since her student days, Ms. Emig has served the New Testament department of Denver Seminary as a grader and guest lecturer. She has also volunteered her exegetical expertise to Where Grace Abounds. She has written numerous articles on the Bible and homosexuality.